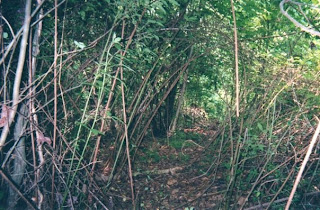 From the archives of my personal journal, here's the account of my first week on the job doing contract archaeology in Georgia, way back in 1998. I was inspired to recount what heretofore shall be dubbed "The Event" after my ex-digging partner SK published what he remembered.

The necessary backstory: SK and I were doing the cultural survey for a future golf course when a couple local guys in a flatbed pick up truck stopped us on the road and asked us some questions. We showed our card, then excused ourselves for more shovel testing. Ten minutes later and we hear several cars return on the edge of the woods, with people calling out, "Come on out! We know you're in there."  We most certainly did not come out, but rather made a beeline back to our own truck, parked off on a rutted out trail in the middle of the pine woods.

What follows is vertabim from my journal after I was home safe from The Event.


October 3, 1998
My hands are laced with seared flesh and scabs; my lips are sunburnt. Poison ivy on my forearm, too. Yah contract archaeology!

The first 2 days on the job were intense. No transit work; SK simply set me up with a topo and lent me his compass-- said to dig a hole every 30 meters or so. It was exhilerating and free to be on my own. Lots of briars -- blackberry brambles and curtains of thorny vines -- I learned after 15 minutes that, when I move, better keep that flannel on.

We've found four sites so far on this disturbed Georgia piedmont. So many erosion canals and gullies from a couple hundred years of lousy farming practices.

And being chased down that maze of jeep trails by rednecks is something I'll never forget. 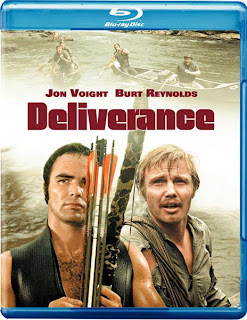 Apparently we were as suspicious as they were to us. Looking back and seeing the 3rd guy standing up --military style -- on the flatbed pick up was probably the most threatened I've ever felt.

"Looks like they've found a friend," SK jittered. Holy shit. Ten minutes of ripping through the woods, [SK driving,] me calling the turns, as the truck gained on us.

At that point, I had already conjured up every scenerio -- the fistfight, the robbery, the shredding of my asshole.... I realized that the next turn would probably loop us back around to the original trail. We went right, and were home free, I thought. Then my heart sank -- a huge log crossed the road. It was so fucking surreal, the archetype of despair. SK tried to get around it, but the slope too steep. We knew we had to face our pursuers. I left my wallet in the truck. Had my bowie on my belt. SK had a metal water bottle.

I just remembered -- I brought out my plastic water bottle too! Why? Must of snagged it as a social prop totally unawares.

Scott said "What's going on?" to the burly driver as he opened his door. The passenger got out too. And then the sun caught the shiny badge on his shirt.... a cop!

"Oh, officer, is it good to see you," I said. Never been so happy to see a cop in my life.

"Keep your hands where I can see them!"

OK. Took a swig of my water bottle, put it down.

He patted SK down, called in his ID. We checked out, of course. Only then did the sheriff talk to us like humans. The locals are neighborhood watch. We "got smart" when they asked us "reasonable questions" down by the road where SK caught the passing truck's attention.

Right. I remember SK telling them who we're working for and who owns the land. SK only got apprehensive when the guy asked where we were parked. "Down the road, off the road," said SK.

What's it to you? I wanted to say. I didn't tho: observe and learn. This happened after SK said he was an archaeologist and the guy jeered, "That's a pretty fucked up job, don't you think?"

We were city outsiders to this sheriff and his local deputy watchdogs. We mentioned we might of stopped for him if he had attempted to show his badge (they picked him up after the road talk), but the cruiser couldn't make it down the trails. Good to know.

Damn, second day on the job and I'm getting chased by cops and rednecks! Archaeology and the people... a delicate relationship.

And that, ya'll, was my introduction to fieldwork.  It was all uphill from there. 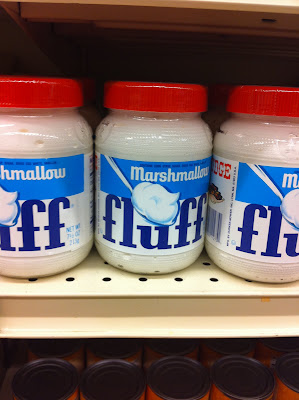 DreamCrisp lives.
Posted by Ryan at 8:48 AM No comments:

Our days at the coastal sanctuary are numbered, but I'm glad to be leaving the place better than we found it.  Here's a before and after series of the latest bit o trail work. 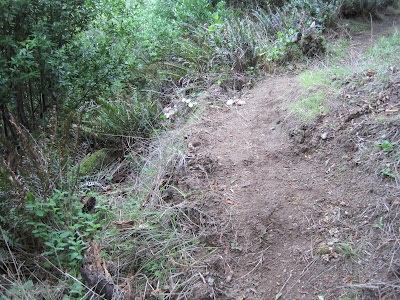 The beginning, a dangerous slope with loose soil. 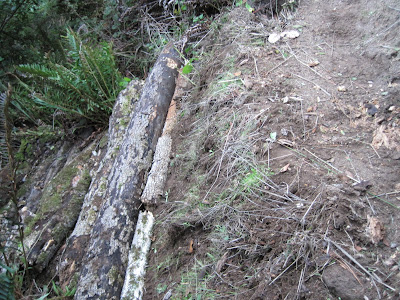 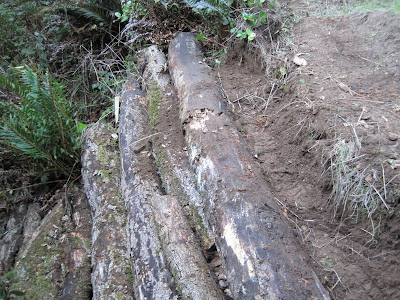 Most of the cribbing done, with willow spikes at either ends of the logs. 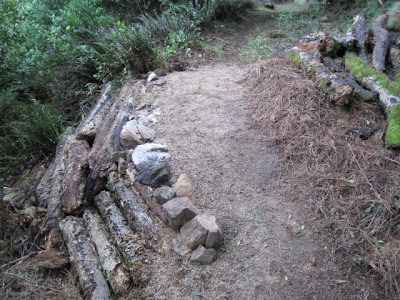 The final product, with rocks capping the logs and some pine straw to make it look pretty.

Ryan
I'm a consciousness researcher on the edge of academia. Or perhaps just the edge.